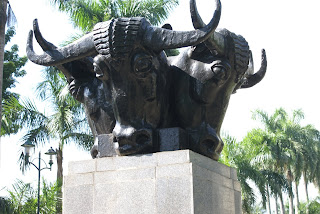 Three (3) Filipinos were recently executed by the Chinese authorities for being caught transiting drugs for syndicate crime groups. Moralist quacks have celebrated them like heroes, which leaves me aghast over such hypocrisy, a quackery that suddenly rendered moot those legitimate questions regarding the inanities and evils of the drug trade.

Crime has been globalized, for how many decades we can only surmise. Gone were those days when crimes were confined to national backyards, with crime syndicates or mafias operating on very broad scales across national borders. Drug mules or couriers are part of the cross-border operations, a fact that moralist quacks would prefer to be blind about whenever they would find narratives to whet their sociopathic tendencies for castigating ‘whipping boys’.

What complicates the solution to crimes today is the fact that even those cross-border anti-crime institutions, notably the International Police or Interpol, have become corrupted along the way. Solving cross-border crimes and bustling mafias involved in them are now getting to be more complicated and challenging.

I wouldn’t even need to belabor the point that many members of the anti-crime institutions are mentally challenged persons. Mediocre in solving crimes to the finish, they render institutions laughing stock and contribute to the diminution of personnel morale in them.

The cooperative efforts of diverse mafia groups—operating across borders—has been increasing exponentially over the last two (2) decades, which led to the globalization of crime as a new phenomenon. The types of crimes have become so diverse themselves, so much that the mother science that studies them—deviance sociology—had sadly lagged behind in developing new tools for understanding them.

Drug production & trade, gold smuggling, racketeering are apparently the biggest in scales of operations. They do tie up with each other in forward and backward linkages, and they tie up with the speculative operations in portfolios, derivatives, and commodities markets. Don’t be surprised if you’d find out that the big-time financier oligarchs up North have their financial-monetary operations linked up very heavily with drug money and the other megalithic global crimes.

Mules perform the task of cross-border transit and permeation of security blankets, thus rendering the mafia operators even more invisible or unknown. If caught red-handed, the mules become instant fall guys who get incarcerated or even executed, while the real mafia operators continue with their operations unhampered by a few crime busts.

Spy agencies such as the MI6, CIA, Mossad are very much involved in the drug trade for instance, they being footstool operators for oligarchic sponsors in reality. The drug money derived from illicit trade, they use for purchasing arms and equipment that they can utilize to arm rouge groups, inclusive of the Al Qaida and Hamas.

So don’t be surprised too that the likes of the United States’ DEA personnel would get the shock over their uncovering of the facts about who are involved in the drug trade. The sense of surrender is instantly felt, with them admitting that drug use and trade can never be eradicated. I hope that our own local anti-drug agency here, the PDEA, will get to the bottom of the crime and see for themselves that it is unsolvable within old frames of tools and solutions.

As to drug mules sentenced to death, I can only but watch with detachment. And nausated over the moralist quacks that abound the planet, who make celebrities out of criminal accomplices and operators.

I did read news about the reverence for drug mules projected by the Philippine media. that's spurious!

Bad news for the drug mules, they're still criminals or accomplices. Who needs them in civilized world?

Remove all those mules and couriers and the mafia operators will be caught!

the mules are part of the crime operations! They must be caught, imprisoned! Who cares making them into heroes? Only the morons do.

Honestly I was shocked at the way the mules were being treated as heroes by folks there in the Philippines. I'm glad to find out that the perception about mules there is divided, with prof like you showing what they really are: criminals!