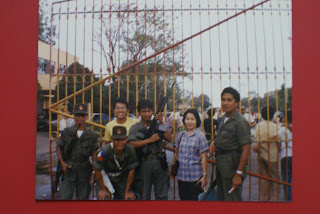 
Good evening from this side of the planet!

It is the 25th anniversary of the EDSA Revolution—the people power revolution that overthrew the dictator Ferdinand Edralin Marcos—as I write this note. Completely attuned to the celebratory mood of this special event, I hereby greet my fellow Filipinos a Happy Anniversary to our People Power Revolution!

As I’ve been saying these couples of years in my blog articles, I was among those youth who constituted the generation of political activists at the time that Martial Law was enforced throughout the Philippines archipelago c. 1972-‘86. Though never incarcerated for my political convictions, I suffered nevertheless from the military-police brutalities during protest rallies and the paranoia caused by constant surveillance by military intelligence operatives.

I still recall well how many of my own fellow activists—those with whom I directly associated with and/or worked with—were detained, with some of them mercilessly tortured. Some advanced level activist cadres decided to join the insurgent New People’s Army, inclusive of couples of my Brothers in my campus fraternity.

In my campus theatre group U.P. Repertory Company, our very own theatre director Prof. Behn Cervantes would be in and out of prison for his political beliefs. Being among his disciple thespians who were advocates of social realist theatre, I and my fellow actors were politicized along a Left radical bent. Every now and then, couples of our leaders and members in the UP Rep would land in detention cells for their political convictions.

In September 1977 did we activists launch the Batas Militar Ibagsak or BMI Rally at the Avenida in old Manila. From then on, series of protest actions were protractedly launched and sustained, each time reaping for us new advocates and recruits. On the 1st semester of school year 1978-‘79, a close core activist whom I worked directly with was detained, forcing me to go into hiding for fear that I would be next in line for detention. I was compelled to take a leave from studies that semester just to stave off potential arrest.

Along the way, many of my fellow activists died in the hands of torturers. Some others who joined the insurgents were killed during encounters with army troops, inclusive of a fraternity brethren who decided to get active in the Manila-based urban guerilla unit. A fellow thespian in the UP Rep, Bong Medina, was summarily executed, his body later found floating in the polluted Pasig River in the early ‘80s.

If there was any great thing that Martial Law did for us, it was its eventual politicization of many Filipinos along distinct ideological lines. The same politicized compatriots swelled the ranks of mass movements, thus helping to form base formations for direct action that would become the forefront of an autonomous civil society.

The forging of a strong civil society was the hallmark of Philippine political life altogether since the heydays of the dictator Marcos. It was the terrain where dissent gelled, enabling bolder moves to overthrow the dictatorship. Special events such as the martyrdom of Ninoy Aquino did catalyze the swelling of ranks of dissenters, but such events do not make strong civil society.

With democracy re-established right after Marcos’ overthrow, civil society continued to strengthen all the more. The Philippines thus became a model for democracy across the globe due to its strong civil society. State-society synergy (to use the lingo of neo-Weberians) found greater avenues for expression, and civil society compensated for democratic governance amid a weak state.

A full quarter of a century hence, governance institutions in this country remains to be weak, a situation that factors in the wide income gaps between rich and poor, large poverty incidence, and endemic graft & corruption. Yet civil society remains strong, and this world of volitional associations provides the foundations of mutual trust that can get people together to dialogue with state and market players for the sake of threshing out issues and solving problems.

The continuous reconstruction of democracy and a strong civil society are the granite-rock legacies of EDSA Revolution to the whole world. Many other 3rd world dictatorships closed shop due to mass risings that followed the ‘Philippine way’, thanks to a new legacy of strong civil society. This legacy is available for the young generation of the day who aspire to build better world via democratic governance, notably the Arab youth.

Still carrying the flame of the EDSA Revolution with me, I do hereby commiserate with my fellow Filipinos who wish to build a strong state, and to the Arab young ones who clamor to overthrow their perpetual presidencies and archaic royalties in order to build a better world via democracy and respect for civil liberties.

Happy Anniversary to us Pinoys! Let us continue to teach other countries to strengthen democracy. My fellow Muslims in Arab countries better study our good example in PH of overthrowing dictatorship.

Happy Democracy for us Pinoys!