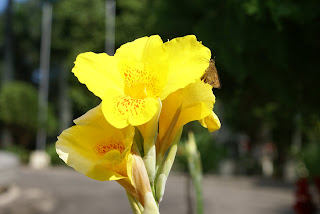 Good afternoon from the Philippine highlands!

Naturally, people will opine that Japan’s economy will be recessionary this very year of 2011. Many overseas workers are now leaving Japan, and most likely won’t return there, adding salt to the wounds the Japanese economy had sustained. It’s a doomsday scenario that both layman and experts do picture right now. Little do people see the positive things that can happen a year after the catastrophe.

It seems that among topgun experts, only the former economic secretary, Cielito Habito (who is now professor at the Ateneo University), sees the positive side to the catastrophe. He forecasts an infrastructure boom that will follow from the negative event, citing what happened to Japan after the powerful 1995 quake that flattened Kobe. Accordingly, Japan’s GDP rose by 3% after the Kobe quake, a good performance in a decade of near zero percent growth.

I do agree with Prof. Ciel Habito about the boom post-catastrophe scenario. True, there will be recession this year 2011, as it will take some time before the geological situation there will stabilize. And it will take some more months to craft a recovery program not just for the northeast Japan but for the entire nation. But next year will be a boom year, when the recovery program will already be in full effect.

What many people are least knowledgeable about is the fact that Japan is awash with gold. Even without external help, Japan will be able to quickly recover from the damaging impact of the catastrophe. But acts of goodwill, such as external aid offered, should never be underestimated or ignored, and most likely the Japanese will accept the boons coming from its friends and allies which will run by the billons of dollars.

The famed gold treasures of Japan were acquired by the Imperial government during World War II yet. Recall that Japanese forces scoured Asia for the treasures during the hot days of that war. The Imperial forces than hauled the huge cargoes of gold to its home base, the total volume of which could easily run by the millions of tons of gold bullions.

Due to incessant bombing operations by the Allied forces during the war, part of the gold was forced to be secreted inside underground bunkers in the Philippines. The Philippine gold cache was salivated upon by the West’s oligarchs, and they did what they can to unearth some of them. Dictator Marcos proved smarter than the others, even as he unearthed part of the gold and deposited them in the islands and overseas (via chain of foundations that were later dismantled, thus leaving no traces of the treasures).

So good are the Japanese engineers at tunneling and bunker construction, technologies that they perfected during the war yet. Their prowess dwarfs those of Hitler’s experts, and that prowess was used to build underground bunkers in Japan to secure the gold hoard. Between the islands of Honshu and Shikoku are tunnels that run through both land formations, deep down underground, safe from the prying eyes of would-be international looters such as cabal of financiers led by the Houses of Rothschild and Windsor.

Chances are that ready-made contingency bunkers are available to transfer the remaining hoard after the quake struck Honshu and moved it 2.5 meters away from its former location. More so that Japan’s secret service had unwind of the Tesla Earthquake Machine type of WMD (used by the rouge Aum cult to flatten Kobe), thus leading to the hatching of contingency plans in the event that hostile forces will pound Honshu or Shikoku with the same machine that could be tantamount to treasures lost forever.

Global observers should better get ready then for the sudden surge of Japan next year, or maybe as early as the latter part of this year. Part of the gold will be released surreptitiously to securitize big projects. For as long as the same hoard will remain in huge amounts, hostile forces should cease from plotting economically damaging catastrophes on the Japanese nation, as the treasures will be available to make its people rise like the phoenix.

So that could be partly the reason why the Illuminati struck Japan with the TEM--the gold! Intriguing yet factual.

O my! So my beloved Japan will endure many more attacks from rouge enemies. I never thought we were so rich with gold, thanks so much for the info.

Wow! What an expose! thanks for the golden info about the golden bullions.

Gracious news that really makes us all smile.

Unbelievable yet factual, will follow your leads Prof. Japan will rise again shortly.